Some experiences are destined. Good as well as bad. This one was good.
Really good.So good - that i am very happy to categorize it as one of my best trips ever.
And i hope, i am going to have better trips than this, because i have not travelled much.

This was the time when i was working in London. Since i was loaded with work on the weekdays,
i used to look forward to the weekends, where i would do one day trips (that saves hotel expense :-)).
I did all these trips alone. Always considered myself to be one of those people who dont mind travelling alone.
In fact, one of those people who would travel alone on purpose - discover the purpose of life and all that ..!
Those one day trips - i covered Oxford,Cambridge,Canterbury.. hmm thats it? surely - must be more. but i dont remember.
anyways, the point is not these one day trips. There is this trip i took to Wales, during a long weekend.Long = 3 days weekend.
Its amazing how, the holidays in UK and US are made to fall adjacent to weekdays so that people can travel or do their own thing.

My flatmate along with his girlfriend had done this journey to wales, and i was very jealous that he had covered a place on the chart
that i had not gone to. Well - this jealousy was ofcourse kept secret - me being me. :-)

so, this weekend came, and i took the oppurtunity of going to Wales. Its not too far from London.
but considering that you are on your own - its a bit difficult. But luckily , after doing relevant research on the internet,
i could find out that i would be just be able to reach the place. For that i had to do..: -

There is actually no problem in all this, but when you are the only one going like this to such a place,
you do tend to see yourself in a different light.

Thanks to the efficiency of all modes of transport in UK,
i took the transit train buses on time, because of which i was lucky enough to catch the last bus
to Cardigan. :-)

And sure enough, when i did the walk from Cardigan Bus Stop to Poppit Sands,
i was the only doing that. Everybody else was coming by cars or something as good.
(Something as good as 'cars' .. hmm ofcourse, other cars) 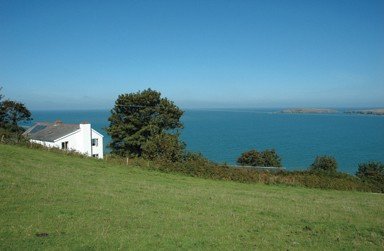 So, yes, thats the photo. Thats the peek of the Youth Hostel you get from far.
and then you have to climb up from the sea level to reach this place.
The photo is taken from the YHA website. And probably i would have clicked the picture the same way,
had i a good camera when i went there.

Ok, so the reason i chose this place, is the basic reason - It was cheap.
Also, i had never been to an Youth Hostel before. I would get to interact with many people.
Many different people - belonging to different nationalities.
I was not sure, how the crowd would be at that time of the year, but i was hopeful.

And - what a view. when you reach this place. you overlook the blue sea.
You see different families who have come with the kids.
At that time, i had no idea how these places worked. that you had to get your own grocery to cook.
your wine to drink.

I just had some cash in the wallet. that too limited. i always make this mistake of delaying cash withdrawal
from a cash machine at a later point of time.

So there i was, at Poppit Sands YHA with limited cash.So the situation, there was only a very very small
shop there where you get tooth pastes some chocolotes etc. I had practically nothing else.

But the thing was, this thing was too exciting for me. Sleeping in bunker beds. All strangers around.
and a world to explore.

As i so discovered, there was this pembrokeshire coastal walk of 180 miles or so.
YHA - poppit sands fell on the track. So.. i was very excited to go the next day for a short mile walk in the morning .

It was evening when i reached the hostel. I bought a few chocolate bars.
Luckily i discovered, that there were some pubs around if i was ready to walk.

But before that, before i went to that pub, had my dinner, i was happy to meet some strangers.
Very happy.

There was this German couple who came with a Motovan. They had been travelling Europe.
For us Indians - knowing that this is possible, is an experience in itself. Me , an Old Uncle from Wales
and this couple got talking somehow. And we had a very interesting time.
I got to drink the wine that they brought with them, but unfortunately, to be polite, i had to refuse
the food that they cooked. :-(

but.. doesnt matter. So.. this is how my Cardigan trip got started.

Early next morning, eyeing the mile coastal walk. I started.
With diary , few chocolate bars and a lot of happiness.
happinessinmotion you see. (Duh -> look at my blog URL :-)).
Ok. dont look any more, the URL has been changed. Apparently, many other websites
have this happinessinmotion url. 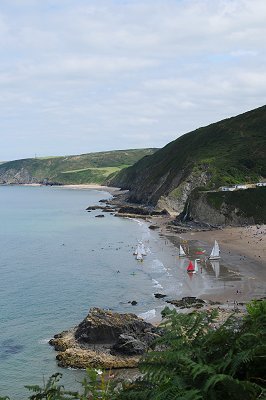 Yes yes.. this is how the view looks. Again courtesy - the internet - and whoever took that one.
But, the walk is amazing. i was blown when i was looking high from the cliff downwards.
the weather was crisp. the water down below looked pristine. I even glimpsed a few seals.
Spotting such animals in their natural habitat is an experience in itself. really !
Specially, when you come across them by chance. What would life be without unpredictability.
Though, i did not see the sails as you can see them in the pic.

As an Indian, this was an experience. Yes, India is abundant with natural beauty.
What i am talking about is people experience.
While i was walking, i came across a couple who were living in house and horse stable on the cliff.
Yes, so, everybody who did that part of the walk had to encounter that house.
So, this couple were raising the horses. May be, that was their passion.
As an India, this is an alian concept. That somebody could chose such a lifestyle and actually live that way.
For most of us, it is a dream, and the barrier to that dream is - us ourselves.
We never want to go away from the cities. We dont want to live in oblivion.
Probably, Indians cannot do without having a social life, set of friends and some consistency w.r.t people
they surround themselves with.

Also, during the walk, a came across an elderly couple were living with a lovely pet dog.
Again, this house was on the cliff. And obviously, the house had a beautiful view of the ocean.
and i sometimes wonder, what they did when it rained, and they had to be indoors.
How did they keep themselves involved.
Again, this is a kind of disease Indians have.
They need to keep themselves involved in something.

During the walk again. I met a girl from UK, who was working in a coffee house there.
She had accepted Buddhism as her new religion.
And, by saving on the money she got working at the cafe, she had almost roamed the world.
Again, i guess, the european economy allows things like that.
A person working in a good coffee house in an Indian city, would be just be able to pay
for the house rent and save little to get through with the month.
Forget travelling outside the country.

So, yes.
I came back from the walk. Had some chocolates. Slept off.
and returned back to London.
But, its been two years since that trip and i can clearly see myself in that place.

I guess, one carries the travels within .. even after one has reached home !

Previous Next Table of contents

Comments on this blog entry are now closed to non-Travellerspoint members. You can still leave a comment if you are a member of Travellerspoint.

If you aren't a member of Travellerspoint yet, you can join for free.